Musical and Thematic Analysis of “Destined”

“Destined” is the story of one man’s attempt to reconnect with his wife after their marriage hits a rough patch. After suspecting the worst, he gets tangled up in a supernatural quandary when a homeless woman claims to know his destiny. When he decides to take fate into his own hands, his life and those around him subsequently falls apart.

This is a very dark film permeated by supernatural dramatic elements. The highly thematic dramatic ideas begged for a score that is equally elaborate and evolving. The score took shape as a fantasia, with central ideas and tonalities carrying throughout the film while treatment, orchestration, and mood adapted to the film.

The first five and a half minutes of “Destined” are the prologue of Act 1. The first passage of music in the prologue represents the main theme of “Destined”. A simple mixolydian melody climbs from E-natural to B-natural over 7 measures. The basic melody is accompanied by increasingly complex chords that cast a very dark shadow over the the mixolydian mode.

This same theme is heard several times throughout the movie, each time conveying a slightly different mood through the use of orchestration, harmonization, tempo, or a plethora of other variables. For example, near the end of the prologue when David cautiously approaches Jenny the main theme takes on more of a mysterious march feel by simply adding a pizzicato bass line, arpeggiating chords on the vibraphone and harp, and increasing the tempo.

Another theme in “Destined” is heard as we see a homeless man walking through the city streets. This theme is effective at creating unexpected suspense and uneasiness because it begins with open fifths, E and B, on the piano, which are common tones that would seem to imply an E major or minor tonality. That is until the end of the piano phrase when the ascending E, F, B, C clearly put the piano in E phrygian (‘A’ in the image below). Next, a harp enters with a very brief melody in A aeolian until suddenly a low F-natural is dropped in under the entire passage that momentarily slips the harmony into F Lydian. The simple addition of this foreign bass note disrupts the equilibrium of the entire passage (‘B’ in the image below). 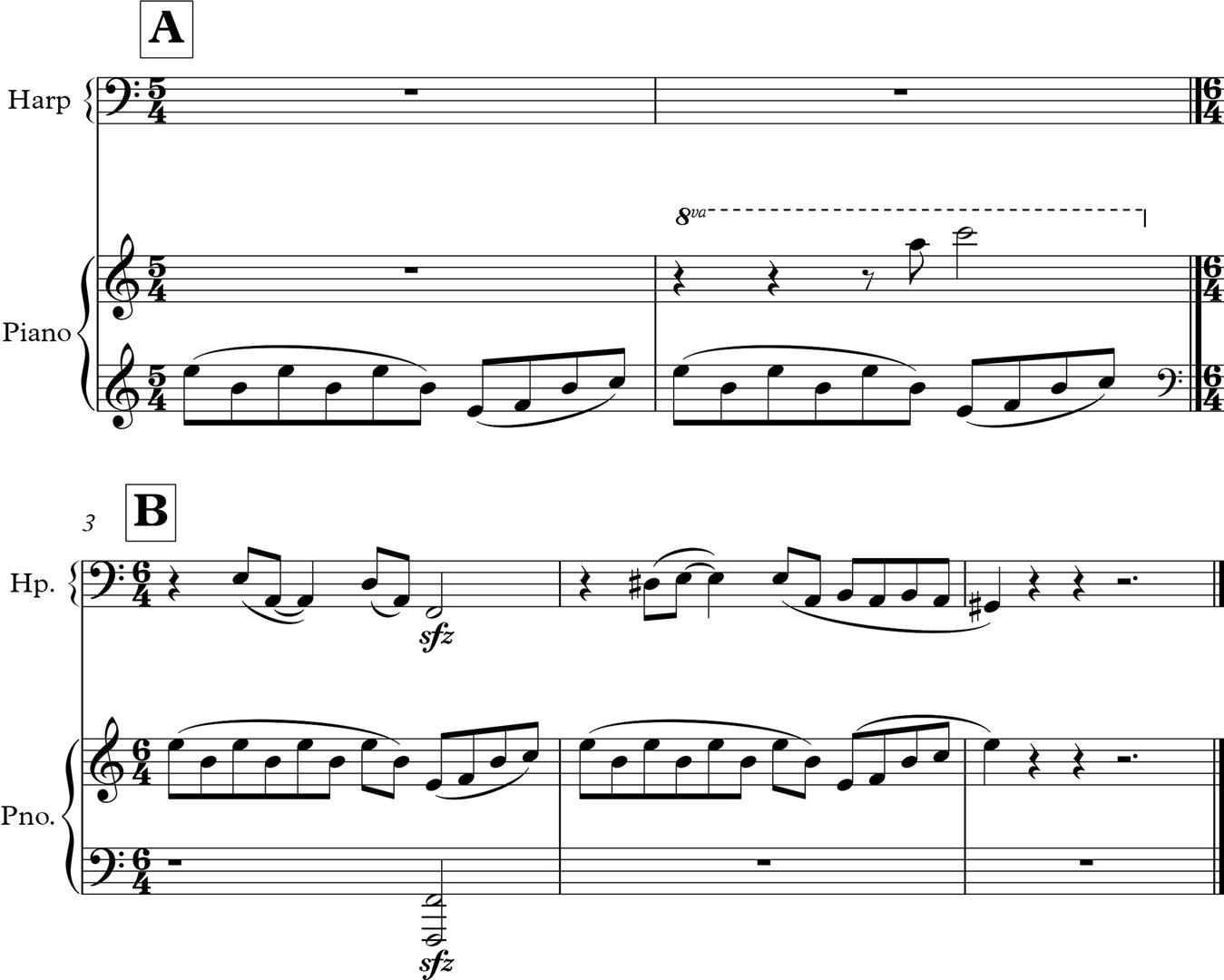 A powerful thematic element that continually evolves throughout the film is that of the supposedly psychic homeless woman. The soul of the “seer” never dies, but is passed between people when the seer’s host body dies. The theme for the seer is a simple dominant-phrygian melody [E, F, G#, A, B, C, D], which embodies the vaguely ethnic and supernatural qualities of the character. It is most often played on the bassoon over an eerie drone, which is established with a contrabassoon plus string bass harmonics. In post-production, a very slight phaser was added to the contrabassoon to create an even more unearthly sound.

Not shown on the score is a contrapuntal cello line. During moments when Jenny is interacting with other characters, her melody is treated with counterpoint to symbolize that interaction. 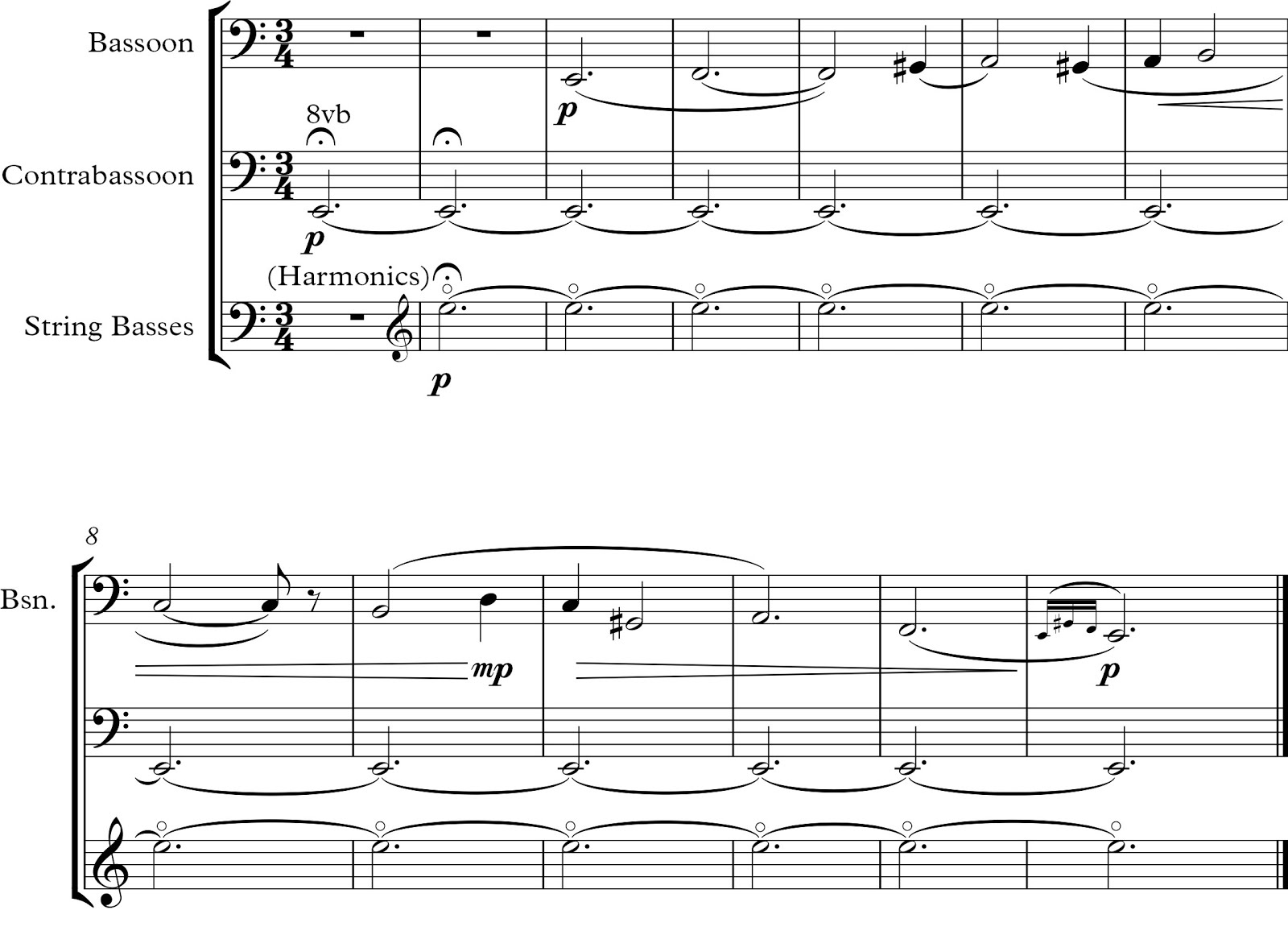